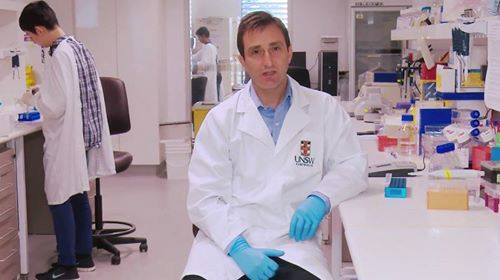 I came across Dr Jeremy Henson’s research around the same time that Carrie Bickmore wore her blue beanie at the Logies. Like Bickmore, Dr Henson is doing his part to fight cancer and his story is just as inspiring. While Carrie uses her well earned celebrity status to raise awareness for one of the most debilitating and deadly forms of cancer, Dr Henson is in the trenches finding a cure.

I could go into detail about how Dr Henson uses Alt technology to devise a non invasive cancer treatment that won’t harm the patient. I could explain the immortality mechanisms or describe the role of C Circle Assays. The truth is, I don’t fully understand the science behind Dr Henson’s research. But I do know that it could save countless lives. (You can view a short 3 minute video outlining the key scientific points here.

A few months back, when we heard about Dr Henson’s research a few friends and I launched a Facebook campaign to help win votes for a Thinkable grant so the research could continue.  Dr Henson’s campaign was successful, and his research received a much needed $5,000 boost. Now he is in the running for another grant program in which the top ten entrants will share in a pool of almost $15,000.

Let’s pause for a moment to consider that Dr Henson is curing cancer. Saving lives. And he and other scientists are scrambling for a share in $15,000 because funding is scarce.

For comparison, let’s get some perspective.

In 2013 Kim Kardashian gave birth to her daughter North. In August of the same year the Daily Mail reported that Kardashian and her partner Kanye West had indulged in an Hermes nappy bag worth approximately $30,000. Twice as much as this Thinkable Grant which will be shared amongst ten scientists. Multiple times as much as the winner of the grant will receive. Remembering again, that Dr Hensen’s research will save lives.

If only Dr Henson were a Kardashian.

The Huffington Post reported in 2014 that Lady Gaga flew fish in from Japan to create an authentic Koi Carp pond to the tune of $67,000. More than four times as much as the Thinkable grant.

And according to online publication The Richest, Queen Beyonce shelled out $100,000 to cover her bootylicious jelly in Balanciaga leggings. While I’m sure that Bey’s butt looks amazing in her Balanciaga’s, that’s still more than six times as much as the total of the Thinkable grant. The one that could help Dr Henson to complete his research into finding a non-invasive cure to deadly cancers.

No, it’s not up to Beyonce or Gaga to fund cancer research and yes they have earned their fortunes fair and square. They earned it with TV shows, production rights, long nights in recording studios and concert tours. All of which is possible because they have an audience. Because you and I sitting at home will listen to their music, download their television shows or buy a concert ticket.

Here’s one more statistic for you – according to Wastewatch, every Australian 5c piece costs 6 cents to produce. While other coins cost a fraction of their value to make, the 5 cent coin costs our government ten percent more than its intrinsic value.

There’s money available if we value life saving cancer research as much as we value the Kardashians, or the luxury of 5c pieces in our change pockets. There may be some hard choices for governments to make. It may mean diverting our attention from the Lady Gaga’s latest frock shock for a moment to give the hugely relevant and important research that Dr Henson is undertaking it’s fair share of air time. But then, unlike Beyonce’s leggings, this research could in fact save the life of your mother, brother or child.

Dr Henson is not in his profession to make a lucrative living. He is curing cancer because he believes he can save lives. He has a PhD in medicine and an Honours degree in pure mathematics and quantum physics. He has 14 years experience in clinical research and is the only world expert in C-circle technology which has the potential to cure cancer in a way that has minimal side effects for the patient. And when he’s not curing cancer he saves lives working as a physician, as he has for the past 17 years. That’s right. By day he’s curing cancer. By night he’s saving lives.

I’m pretty certain that this is the very definition of a superhero, minus cape and phone booth and an incredibly deceptive pair of spectacles. And supporting his research should be our priority.

To help Dr Jeremy Henson to make a difference, please take 30 seconds (literally) to go to Thinkable and sign up to vote either via Facebook or your email account. Share it on your Facebook account, tell your friends and family to do their bit too. It’s worth the few moments if it helps fight this deadly disease.