Last night SBS aired an Insight titled Edge of Life which discussed the feasibility of resuscitating 23 week gestation preemies at birth. The program brought to light one of the great taboos in the premmie community – given the known outcomes, should 23 weekers be resuscitated, or are the ongoing medical costs, quality of life probabilities and low survival rates reason enough to withdraw support? This postulation probably seems completely foreign to most parents. Given the choice, would you not choose to give your baby every chance? While Insight did an admirable job in a very short period of time in discussing the legal, medical and ethical considerations and of introducing stories from families that have been in a position to make such a life changing decision, it is nearly impossible to give these stories real context to an outsider.

Many may have found it harrowing to watch and to hear the stories of the families affected by extreme prematurity. Some of the families had lost their little ones at or soon after birth, some had lifelong and extreme disabilities and some had survived against the odds. In some cases, when presented with the statistics, parents had chosen not to resuscitate their babies and in some cases they had requested any necessary support be given to save their tiny child. This is such a difficult concept to understand or explain.

But, in the interest of a deeper understanding and greater awareness of a circumstance which affects 8% of babies born in Australia it is certainly worth a try. I haven’t spoken much about that part of our ‘journey’ through prematurity. In part, I have kept it to myself because I am afraid of the judgement that will follow, not the least of which is from myself. Partly, it’s still just too raw. And partly, every day we try and let it go – all the strange and surreal feelings we are yet to process about the experience as a whole.

I think in light of the bravery shown by the parents on last night’s Insight it is time to come clean. Some of this I have alluded to before, but today I’m going to give the whole truth. I hope this gives the debate some context. Please understand this is my story. It is unique just like everybody else’s. And all of the players did everything they knew how to save my child.

On the day of that fateful scan, the one where I was rushed into delivery at 23 weeks they told me she would die. They told me – in no uncertain terms – that there was nothing they could do and that babies at this gestation were not ever resuscitated. We cried. A lot. We sobbed at times. That 48 hours waiting for her, my healthy beautiful girl darting around on the ultrasound screen, to make her entrance and pass away. To hold her as she died. We waited for that, wishing it would happen sooner rather than later because at the time we had been given no hope and prolonging this acute pain seemed cruel and unnecessary.

With every hunger pang I panicked, thinking it was time. Every time I needed to go to the toilet, my heart skipped ten beats. Moving on the bed felt like it could cause spontaneous labour and bring about my baby’s ultimate destruction. There is no other way to describe those two days but a slow moving hell. I just kept thinking, right now she’s healthy. And very soon my body will kill her.

After two days the doctors were flummoxed. I was still pregnant. If I could by some miracle make it to 24 weeks there was a chance. Specialists were called in, hospital transfers were organised. Hope, just the tiniest little bit, emerged. In the words of my OB at the time, ‘This is still a very, very long shot. But it’s a shot.’

WATCH: INSIGHT, THE EDGE OF LIFE

The doctors and nurses started talking statistics. As overwhelming as my grief had been in the two days prior, the statistics were more so. Up till now, no one had given us a chance. So no one had bothered with statistics. There was no hope. Since the doctors were so sure I would have delivered already, they didn’t know what would happen next. One registrar from the NICU sat with me one night and answered my questions for a few hours. I asked her the same things over and over again, trying to wrap my head around what she was saying. And what she couldn’t say.

Survival at 23 weeks was possible but extremely unlikely. (Bare in mind, the updated statistics give 23 weekers more hope than what the stats at the time gave me then). If death was the only thing to consider there would be no question about resuscitation. It was the ‘outcomes’, the chance of being ‘in tact’ that bothered me. And at 23 weeks the statistics were grim. She had a 50/50 chance of a profound disability. And if she managed, by some miracle, to avoid that she would be at heightened risk of moderate disability, including blindness, deafness, cognitive or physical impairments. So despite the fact that my baby and I were both perfectly healthy, the registrar informed me that no hospital in NSW would resuscitate until 24 weeks except under exceptional circumstances.

If we made it to 24 weeks we would have a decision to make. If our daughter was born between 24 and 26 weeks it would be up to us whether or not she was resuscitated. With no medical training, having never seen a NICU or understood the terms ‘outcome’ and ‘in tact’ we would be deciding whether or not her quality of life would ultimately be worth saving. It is here that I disagree with the ethicists on the Insight program – I don’t believe it is fair to put parents in that position. You might wonder why I would want someone else to decide the fate of my child. I suppose, like everything else about prematurity, the answer is not simple.

READ ABOUT: DIARY OF A PREMMIE

You see, we chose not to resuscitate. Armed with the stats but lacking any real understanding or experience we had to make this decision and live with it. And unless we were incredibly lucky, one way or another it would haunt us. Disability is a difficult thing to qualify. Would we have loved her any less? Absolutely not. I was already completely in love with her and that would never change. Would we love her differently? Probably. She would be a different person. We would love her to the depths of our souls but our relationship with her would be different if she were profoundly disabled. And we had a son to consider.

I am scared to admit it, but at the time I think we made the right decision. Knowing what I know now, having the context of the NICU and being a more experienced parent – I would choose differently. And this is why I don’t think it should be left to the parents to make this decision. I think the grey area is too much to deal with when a parent to be is already under the most debilitating and extreme stress that they could possibly be under. It would have been the right decision at the time, but it still would have been the wrong decision because we didn’t know any better. 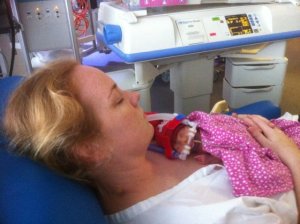 Day by day we watched the statistics. We weighed up the evidence like our daughter was a business proposition. I made a daily decision not to call the doctor and tell her I’d changed my mind. Every day the odds change 2-3 %. At 25 weeks the analysis seemed, in my mind, to tip in her favour. Her quality of life would be worth fighting for. Her chances of living a life that was full of pain and suffering were that much further away. I made that call to the doctor and chose resuscitation.

It is little wonder that parents of premmies are likely to suffer from PTSD after being forced to make decisions like these, often more than once depending on the outcomes in the NICU. But these stories need to be heard because they are real and there is an element of guilt that is never fully uncovered through a veil of silence. I can own these decisions now because I think we did what we knew to be best at the time, but there is not a day that I don’t feel incredibly blessed to have been given time to change my mind. Other parents are not so lucky.

4 thoughts on “Further Insight Into the Edge of Life”