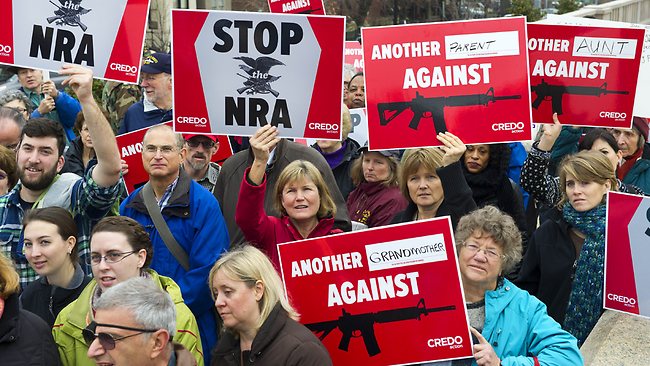 I read today of the NRA’s attack on Australian Gun Laws through an article entitled ‘Australia: There Will Be Blood’ in the organisation’s Gun Rights publication, America’s First Freedom. In it, the author claims that there is a ‘growing consensus’ in Australia that the laws have failed to make our nation safer. It also states;

“For those who became victims, or who simply examined the situation with open eyes, it was rather clear that they were not. Gun rights were, for all practical purposes, gone forever.”

I would argue that guns don’t need rights. People do, whether they own a gun or not.

READ ABOUT: THE NRA’S ATTACK ON AUSTRALIAN GUN CONTROL

It seems very few people in America are brave enough to publicly contest the claims made by the NRA. Though as many as 90% of Americans favour stricter gun control through more thorough background checks, many appear to be resigned to the fact that even that is a pipe dream. The NRA lobbyists are just too strong.

I know and love many Americans, and in fact I lived there myself for a short time growing up. It pains me to think that such an extreme organisation could hold the balance of power against the wishes of the greater population.

And while Americans in favour of gun control may feel impotent to create change, I don’t think there’s much to be gained by staying silent – this kind of propaganda needs to be brought to account. These political lobbyists are endangering lives, and not even Obama, the man who did what most people thought was impossible when he successfully introduced universal health care, has so far been willing to take the NRA on directly.

So here is my response. I may not be Obama but I have a voice.

I’m anti guns. And not in the way that an anti vaxxer says ‘I’m not against vaccines but…’ I’m 100 per cent against guns in almost any domestic setting. They are designed only to kill. Unless you live on a farm and may have to put down dying animals or scare away mobs of kangaroos from your crops – you don’t need a gun. Again, the sole purpose of a gun is to kill. From a philosophical perspective, a person who takes any other position on this subject is saying that there are circumstances where they may want to kill another person.

READ ABOUT: WHY AMERICANS ARE LEARNING TO LIVE WITH GUN VIOLENCE

And here’s the thing: there hasn’t been blood. 20 years later there still hasn’t been an escalation in violence. Quite the opposite. The laws haven’t failed. While you create vagary around the facts, the researched truth is that the decline in gun violence more than doubled in the year following the new Gun Laws introduced by Prime Minister Howard in 1996. Our rate of gun homicides is 370 times less than America’s.

There is no blood. There is no vagary. Guns kill people. Australia got rid of guns. Now there is less blood.

And as America watches on and the hand wringing over gun control continues more American blood is spilled. As extremists say ‘But it’s our constitutional right according to the Second Amendment!’ another massacre is around the corner, and an unlucky group of innocent bystanders lose their right to live. As the true believers wave their arms in despair and say ‘We need to protect ourselves!” a group of school children are murdered by the very guns that are supposed to protect them.

Saying that ordinary civilians need guns to protect themselves is admitting you have no control over the actions of those that already own guns. In itself that’s a reason to exercise gun control. You are loudly proclaiming that there’s something to protect against and implying that that something is guns.

I have a sound byte of my own.

All Americans have the right to live a life free from violence. Your right to own a piece of machinery designed to take that life does not outweigh anyone else’s right to live. You can change the second amendment. That’s what amendments are for.

READ ABOUT: THE REACTION TO THE SANDYHOOK MASSACRE

But if its not then let’s just say I care about Chris Lane. An Australian murdered in cold blood by an American teenager who had easy access to a gun. Your gun laws failed this young Australian and his family, as they have so many others. He had his whole life in front of him and someone with a gun took it away for no reason other than he could.

A boy with a gun killed Chris Lane. If I can’t care about the American’s so easily murdered I can certainly care about Chris.

A final thought for the NRA: You say you are concerned that President Obama might use the Australian example to try once again to get gun control on the agenda and I hope he does. Ignoring the fact that this rumour is purely an NRA publicity stunt, let’s not forget that Obama managed to convince Americans that they have a right to free health care. I sincerely hope he’s able to convince them that they also have a right to live free from the fear of gun violence.

20 years after Port Arthur and almost 20 years since new gun laws were introduced Australians have that freedom. I hope Americans soon follow.